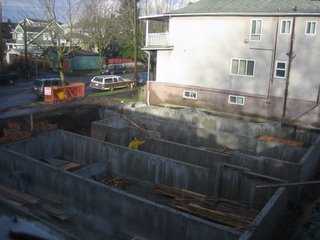 The sun is out. I wasn’t sure it was still there, so this is a great relief. We are one day short of having experienced the most rainy days in a row on record for Vancouver. The construction workers next door have laid the concrete foundation for the house. There’s just one guy out there today. His hood is off. He looks happy.

Went to hear Arthur and Marilouise Kroker, and N. Katherine Hayles at UBC yesterday. Enjoyed the Krokers for a wide open riff on the problem of post-human subjectivity. Discussion on police/state surveillance of performance artists such as Critical Art Ensemble’s Steve Kurtz (who was arrested under the Patriot Act while in the midst of work on a project interrogating new uses of the biological) and Steve Mann, the Toronto professor and cyborg whose electronic implants were forceably removed by Canadian airport security at the St. John’s International Airport. Fun discussion about second-order postmodernism, marked by the emergence of the “remixed body,” in which the nervous system is externalized– ie technologized and social. They closed with a discussion of the biometric state, with all its intricate invasions of the body in its quest for perfect control. Lots of stuff, a bit hard to hold onto given the rate at which it was delivered. What made it productive for me was the juxtaposition of a wide range of arenas– from conceptual art to the war on terror to popular music to medicine to computer science to feminism to Babylonian mythology, and the attempt to pull them together into a theory of subjectivity.

N. Katherine Hayles spoke very differently. Arguments laid out in Powerpoint and meticulously constructed and communicated. (I’m thinking very much in terms of pedagogical strategy these days. In my mind, both methods work. One generates excitement around the range at which it is possible to think, the other demonstrates how logic works.) Hayles illustrated the ways in digital and print culture in our contemporary moment are interconnected, and specifically how contemporary print is influenced by the digital. She sees books, in fact, as part of digital culture– a particular form of output.

Afterwards, off to the Koerner Library (since we were up there) with Rita, to scope journals and new books. And then another marvellous culinary discovery– the Modern Cafe on Dunbar. It’s an okonomiyaki restaurant. Delicious. Though my robot leg did not like the slippery floor.